Current stroller models host a wide variety of hand brake systems.  While the majority have a simple 'on/ off' design, others use disk brakes in order to allow one to slow down  without coming to a complete stop.  This post will go through a few of the more popular, current, stroller models with hand braking systems, discussing their strengths and weaknesses from the viewpoint of design and repair. 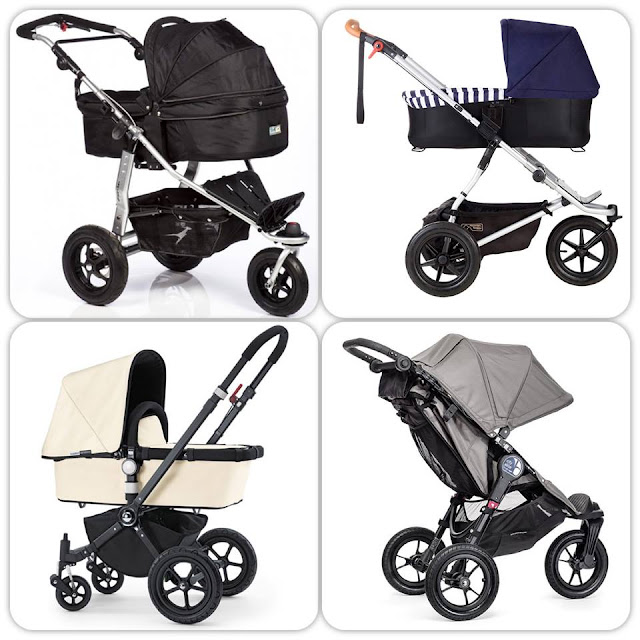 Bugaboo has long been the flagship of high end ultra-light strollers, and it is arguable that the current trend of 'on / off'' hand brake systems among other manufacturers might be, in part, the result of attempts to replicate their success.

The Cameleon's hand brake has changed little in design over the years and is, from the viewpoint of repair and simplicity, probably the best 'on / off' hand brake on the market.  Though the system has had a few problems in the past, such as the handle often breaking on the Cameleon 2, and though the wire can rust and need replacement as with any other stroller , the Cameleon's system is elegant and simple and, given that one has access to parts, quite easy to repair.

Babyjogger swapped out the foot brake, present on their earlier models, with an 'on / off' hand brake.  Though the system tends to function well and hold over a long period of time, it is more complex than the previous foot-brake system, which often failed to lock after a few years if it hadn't been maintained properly.

Replacing the wire is relatively difficult, requiring the disassembly of several parts, but at least uses a generic brake wire and doesn't involve drilling.  It's not the best hand-braking system on the market (and frankly, I'd rather that they'd stayed with a foot brake), but it tends to hold out if oiled and is at least repairable at home with a screwdriver and replacement parts.

Mountain Buggy has had a lot of bad luck incorporating hand brakes onto their strollers.  The Terrain model, which thankfully still has an 'on / off',' foot brake, uses an additional disk brake for slowing the stroller.  The caliper design is too weak, however, to keep the system functioning for very long without continuous tinkering and swapping of quickly worn-down parts.

Given this debacle, we were shocked to find that the Mountain Buggy 3.0 had swapped their classic, simple, genius foot brake design for an abysmally complicated and shoddy 'on / off' hand brake.  We've already written a post about this system so I won't go into it here.  You can click on the link below if you are interested.  Of the high-end strollers, this hand brake system is one of the worst.

TFK uses a disk brake system that can be locked to fully brake the stroller.  With disk brakes, one can squeeze the brake handle (as on a bicycle) to slow the stroller, which is handy when going down steep hills, especially in the winter. Their handbrake system uses a generic brake wire, coupled to a pair of disk brakes via a central mechanism on the lower back end, that is easy to disassemble.  The system has many separate parts which can be swapped out if necessary, and are relatively easy to obtain through retailers.

TFK has been pretty good about keeping to the sturdy simplicity of their original design.  The only change that we've noticed, over the past few years affecting the brakes in an adverse way, was the changeover to plastic rims.  The disks, that the calipers clamp onto, are not held as tightly with plastic rims as they were with metal rims, resulting in some occasional squeaking - a problem that does not, however, affect the overall functionality of the system itself.

On a closing note, we recommend that you oil the hand brake system on your stroller regularly, de-rust metal elements, and keep the brake system (in particular, at the point where locking pins meet the wheels) free from small stones or other debris.
Lagt inn av joker noob kl. 07:43