This summer we've had the opportunity to test out three of Babyjogger's mini variants: the City Mini, City Mini GT and Versa.

All three use Babyjogger's trademarked easy-fold system, one of the key benefits with all of Babyjogger's models.  The design of this system is tremendously easy to use and when opened up, proves to contain all metal parts which help with the longevity of the mechanism.  The only real weak point in the system is where the mechanism connects to the chassis on the handle and front ends.  Here the mechanism tapers into long flat metal bars wedged into the aluminum chassis via a two-part plastic holding mechanism.  These flat bars can occasionally snap as a result of misuse or accident, and it would be nice to see this element switched out in the future in favor of a tightly fitting cylinder welded further onto the mechanism's interlocking disks.  Overall, however, this mechanism is remarkably elegant and stable, and tremendously easy to use.

The City Mini GT costs a bit more than the plain City Mini, but the cost is worth it in our opinion.  The wheels, a smaller version of the City Elite, are foam filled tires, providing the stroller with some shock-absorption if you're taking it out in nature, while the City Mini sports foam tires around thinner plastic rims (a traditional design for smaller travel strollers) and is really not off-road capable.

The GT also has a hand brake like the Elite, which is easier to use, but is more difficult to repair if it is not oiled periodically.  Switching out the brake line on Babyjogger strollers is tough potatoes for most people, neccessitating a good deal of dismantling and requiring either an original brake line or a lot of ingenuity to make generic parts fit within the tight and carefully measured confines of the mechanism. 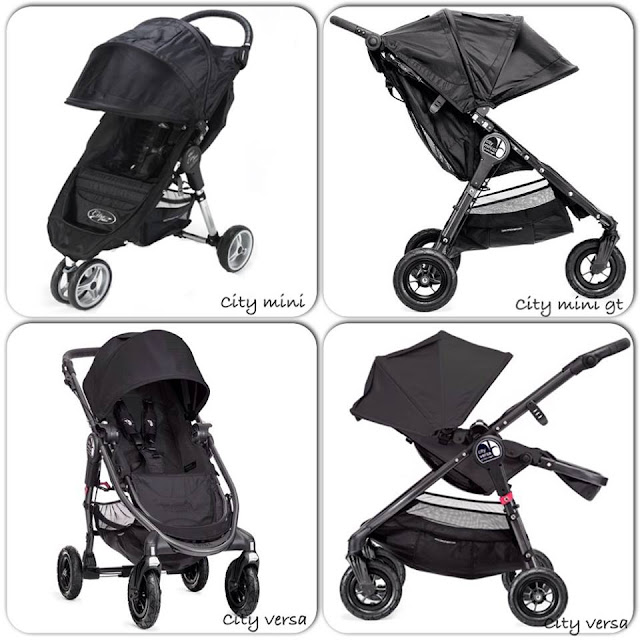 The City Mini, by contrast, uses the older foot pedal mechanism, which is much simpler in design and easier to fix if it starts to malfunction.  You can see our video here, if you are having trouble with this mechanism.

The last major difference we found between the Mini and the Mini GT was the handle, which was much more user friendly on the GT both because it straightened out at the apex, providing a wider area for your hands, as well as because it was adjustable, which is nice, especially if you're a bit taller.  If this is a short mother reading this, think about you poor husband and his tired back when considering which of these models to purchase.

The City Versa, which has been discontinued, has all the advantages of the Mini GT with the added value of a reversible seat, a major plus that many manufacturers of three wheel strollers fail to realize.  In our experience talking to customers, having a reversible seat can be a deciding factor for people when purchasing a stroller.  It's impractical on a three-wheel stroller from a design-standpoint, but those brands which have found a solution for this, at least for children under two years, like TFK's Multi-X bag, or Mountain Buggy's face-to-face seat, likely make a good profit.

The Versa also has two swivel wheels in the front instead of one which, in our opinion, doesn't really do much for the stroller, though there is a common myth that the added weight of two front wheels keeps strollers from tipping over backwards.  As long as you don't overload your handle with bags, this is generally not a problem with most three-wheelers (there are some exceptions that get a bit back heavy when the seat is extended into a lying position).  Mini or travel strollers with twin front wheels often develop "wobbly wheel syndrome." you can see our post here, on fixing this problem with a Bugaboo Bee Plus for tips if you have this problem.

Hope this article has provided some use.  As always feel free to leave questions or comments below.